I would like to take a minute to thank Yates for the absolutely Outstanding service we received this week. We came in on Tuesday around 1 PM, and were greeted by Patsy Cantu.
We had just come from one of your competitors here in Lubbock, where we had a very negative sales experience. Over 2 weeks ago they ordered our carpet. The install date was set for Wed of this week. I placed a call on Tuesday to confirm, and was told the carpet had been damaged in shipment, and it would have to be reordered. They knew about this on the previous Friday, but did not bother to call me. We had prepared our house for installation by moving furniture to the covered porch and garage....now, we were going to have to wait another 2 weeks. I asked for some consideration due to the fact they had not bothered to contact me with this info. I asked for a $100 reduction in the installation fee...which was greeted with NO.
Not once during the conversation we had with them did they ever say “what do we need to do to make this right". I suggested that they should have offered to come help me move the furniture back in until the new install....guess what.. they did not even offer. So with no adjustment to the install fee or even common decency to offer help, I asked for a full refund.
We then came to Yates...wow, we could not have been treated with more respect. Patsy took us to the area to show us samples carpet. We chose several samples to take home. She shows up less than an hour later to measure! She then goes back to the store to figure pricing. An email was sent about an hour later, followed by a call from her to tell us she would be off the following day, but that we could come in and finish the sale and schedule install the following day. We arrived at about 10 , and spoke with Gary. We paid the entire amount, and Gary went to work to get a quick date for install. At no time did we ever ask for special treatment because of our previously described treatment, but we were made to feel that we were the only customers you had! He said the install dept would call later in the day. At about 5 , we received a call to ask if Thursday would be OK with us.....I was beyond shocked! It had only been 2 days ....and we were going to get installed! The following morning, Amanda calls at 8:30 to tell us the crew would arrive in 30 minutes!
Again, we were beyond shocked!
The 2 guys arrived at 9, and immediately went to work! I don’t think I've ever seen such efficiency! They worked incredibly fast! By noon, the entire house had tack strip and padding down, and several rooms already had carpet ready for stretching. These guys had the entire house done by 5:30 PM, and were gone!
This is some of the most outstanding service we have ever received for anything we have ever purchased! Thank you to Patsy, Greg, and the install crew! You were understanding, kind, and respectful that this is a major purchase. We simply cannot thank you enough for the kindness and professionalism shown to us. We will recommend Yates to all our friends and family, and will most definitely come back in the future.
Thank you and your wonderful staff for making us feel special. 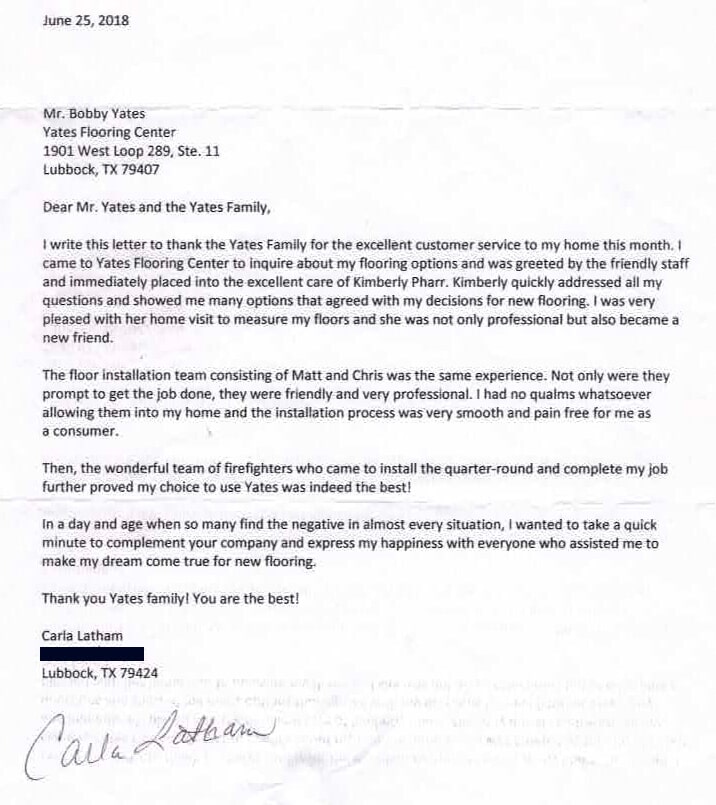 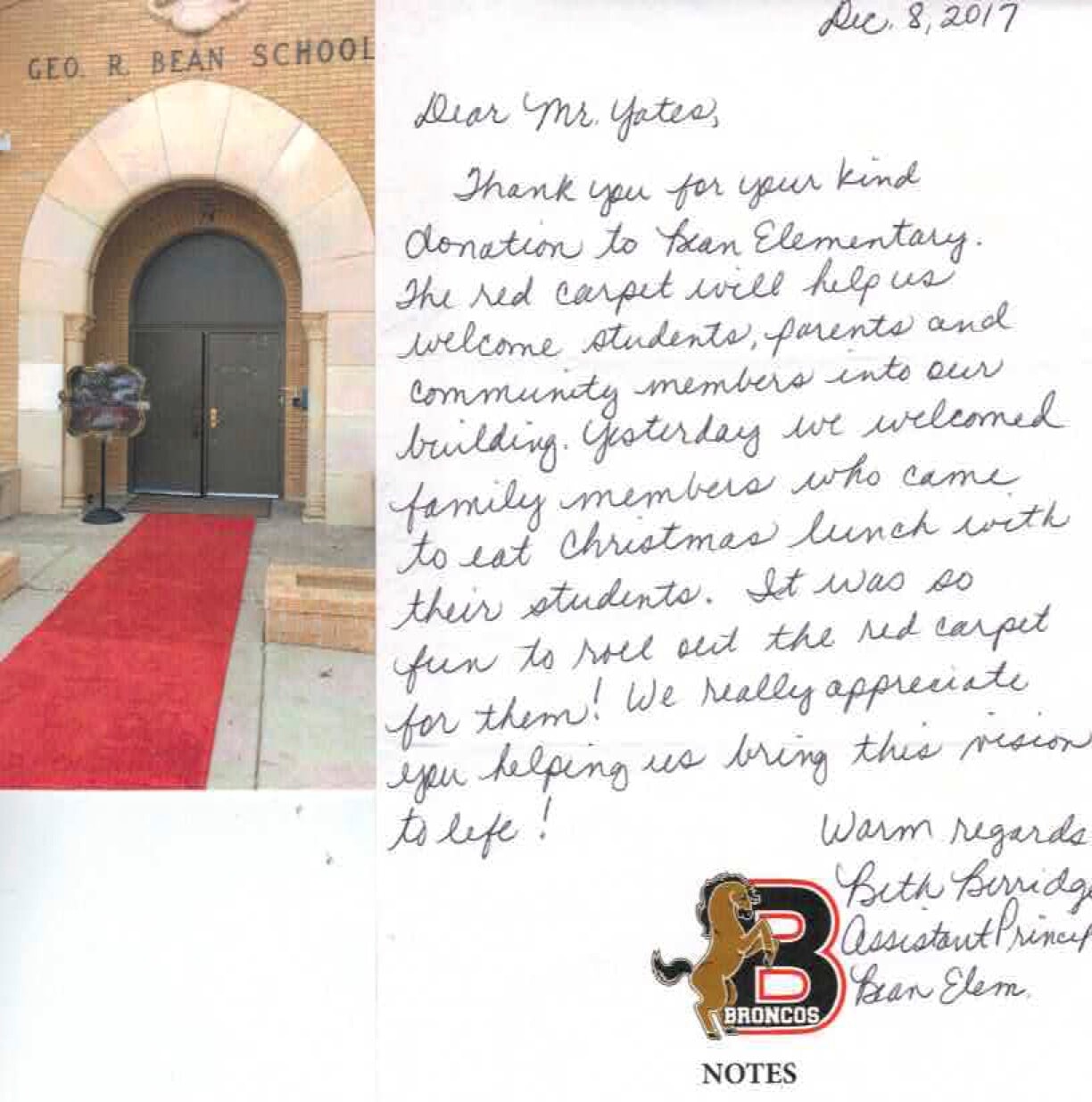 Building a home can be absolutely overwhelming. The Yates team made the flooring decisions on our new home anything but that. They were exceptional to work with. They were always prepared at meetings, they had innovative ideas and they listened to my own personal tastes and incorporated them. I love my house! Thanks Yates for doing an amazing job.

Yates is the only flooring center you should use in Lubbock. The is huge and if it's. It in stock they will find it for you. Will Truby's customer is amazing! He never hesitates to drop every king and mak me his priority when I walk through the door. Have used Yates for several projects over the years and will continue to use them in the future.

I have been a Yates Flooring customer for 15 years. We own a home building/ remodeling business & the they provide us is over the top, second to none. Always a helpful, do the right thing kind of staff. Scarlett is our sales associate we work with and she has a designers gift w/ decor. I recommend Yates flooring to all. You will be glad you did so when it's all done.

Scarlet is our salesperson at Yates flooring in Lubbock. She has always provided excellent !!! She has helped in finding the colors and products to make our flip houses and custom homes sell - easier and for more money!! THANKS Scarlet and Yates!!

I have been looking for years for flooring for my house and always ended up giving up due to cost or lack of direction or help from anyone. A friend told me about a sales rep for Yates that truly helped her so I hesitantly decided to try one last time. Will Truby was amazing and very helpful and I ordered my flooring (which was all in stock) that day and was able to have it done the next week. I highly recommend Yates Flooring and Will Truby if you are looking to have affordable flooring installed and someone to help you through the process!

Yates Flooring Center makes flooring easy! We worked with Coby McDougal on our custom home and are so pleased with the results. From Coby to the installation staff, everyone was so professional and committed to getting the job done right. They get a five star rating from me!

Knowledgeable friendly staff! They provided us with customized tailored to meet our taste all while staying within our budget. Couldn't be happier and have recommended Yates to others we know. Thank you!

Design dream Yates has the most unbelievable of high end products I have ever seen. Hands down it is is the best place we have done business with including the Dallas and Austin area. Lubbock is fortunate to have a business of this quality. They offered us so much in product, and design. We highly recommend them.